Why Do I Have Uneven Underarms?

Unevenly toned underarms can be caused by a wide range of things and are actually more common than you might think! Though they can cause embarrassment, an uneven underarms are nothing to be ashamed of and have a lot of common causes (along with a few rarer ones), so let’s take a moment and explore some of them together to get a deeper understanding of why underarm skin darkens. 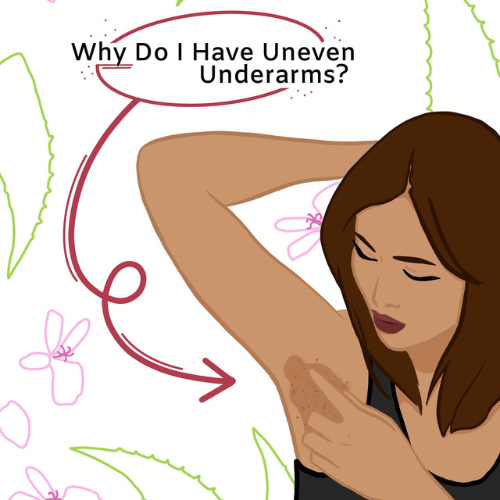 The Day to Day Causes

Let’s start with some of the most common causes of uneven skin under the arms. One of the biggest questions asked about underarms is why they look uneven even though they are frequently shaved and it just so happens that the answer is in the question itself. Shaving and plucking the underarm too often actually causes irritation and abrasion to skin, causing scar tissue or skin to become uneven with unwanted hardness and even dryness. The only way to avoid this is to shave and pluck less frequently, giving your underarms and hair follicles the proper amount of time to recover and regenerate and be sure to moisturise and use a deodorant that doesn’t contain harsh chemicals on freshly shaven skin.

Another common cause is dead skin cell accumulation under the arms. This, like the skin on your face, happens when you don’t properly exfoliate. Buildup can happen all over the body, causing blocked pores, excess oiliness and – you guessed it – uneven skin. To avoid this, be sure to use a gentle scrub under your arms every other week. Soft scrubs can be made with brown sugar and honey, just be sure to take care in sensitive spots!

The last common cause is actually tight clothes. By wearing a tight shirt, dress or even several layers you’re actually not allowing skin to breathe and causing friction under the arms which results in damaged, irritated and uneven skin. Don’t worry, you can still put on that favourite item of clothing, just be sure to take it easy sometimes and wear something loose or that allows a lot of airflow to give those pits a break!

The “They Happen Over Time” Causes

Hyperpigmentation is a big cause of uneven underarm colouring and it can be caused by everything from acne scars to sun damage to hormone fluctuations, all of which increase melanin production in the skin. It can be quite common with many people experiencing some form of hyperpigmentation in their lifetime, but it’s often caused by long term issues and can’t be treated easily with just the use of brightening products bought in store.

Another long-term cause of uneven underarms is smokers’ melanosis. While this condition is usually seen concentrated in the discolouration of the mouth and gums, smoking can actually have effects on the underarms too, turning skin under the arms darker and causing hyperpigmentation. Fortunately the treatment for this can be as simple as quitting smoking and the uneven patches will eventually fade on their own.

Acanthosis Nigricans is when the skin creases, folds and becomes uneven and discoloured. It’s most often caused by being overweight as the skin rubs together, doesn’t get enough ventilation and ends up thickening and starting to become uneven, most commonly happening around areas like the underarms, groin and neck. It can also be caused by diabetes and other conditions that affect hormones.

There are a couple of other causes for uneven underarms that are a little more serious and require proper treatment rather than just a brightening product you can buy over-the-counter. One of these is Erythrasma. Erythrasma is a bacterial infection that occurs in the folds of the skin. It happens when the body gets too hot and there’s no ventilation in sweaty areas and bacterias begin to grow, causing discolouration and making these areas itchy. It’s quite common to see erythrasma in a hot, humid climate and unfortunately it is often a long-term or chronic condition which needs antibiotics and topical treatments. Doctors should always be consulted if there’s worries about this condition!

We’ve bought it up many times now, but commercial deodorants and antiperspirants oftentimes contain nasty chemicals and harsh ingredients that dry out, irritate and damage underarms, eventually causing uneven skin tone. This discoloured skin will last as long as you use these products and can take a long time to fade and lighten even after you stop using them. As you can see by reading all about these causes of unevenly coloured skin, your underarms are actually so much more sensitive and require a lot more care than what you may think! That’s why we’ve created the first entirely fruit and plant based brightening spray in Malaysia!

The Natural Anti-Odour Body Spray is made with the delicate nature of armpits in mind, filled with natural brightening agents like fruit acid extract and natural odour-eliminating activated charcoal, skin will be soothed, refreshed and brightened too, all while keeping you smelling great, actually feeling good throughout your day and boosting your confidence to wear whatever you want and participate in any and all activities without fear of unevenly toned or discoloured underarms holding you back!

Click below get your hands on the Natural Anti-Odour Body Spray and start your journey toward lighter, brighter and healthier underarms today!

Picking the Right Products for YOU!

Picture this: You’re standing in the store, staring at the rows upon rows of skin care products, trying to decide what you want to pick up and take home. It can be a little overwhelming, right? Being faced with so many choices for so many different things. There’s an...

END_OF_DOCUMENT_TOKEN_TO_BE_REPLACED

My Hair is Dry, what Should I Do?

So you’re wrestling with dry hair. Don’t worry, you’re not alone! Whether it’s something you’ve dealt with your whole life, a result of a dye or bleach job, or even just because you haven’t been able to get to a hairdresser since MCO happened - dry hair is a common...

END_OF_DOCUMENT_TOKEN_TO_BE_REPLACED

In 2018 there was a sudden rise in the popularity of using facial rollers for skin care. We’re sure you’ve seen a Jade Roller or a Gua Sha stone once or twice, maybe in the hands of a favourite beauty influencer, or on the shelf at Sephora. They’re oftentimes seen...

END_OF_DOCUMENT_TOKEN_TO_BE_REPLACED

When asked about a miracle cure for skin, many people think of Australian Pink Clay. Coming in many forms, this clay is a supposed solution for any and all skin types, boasting healing properties for acne, the ability to melt blackheads and clogged pores away and even...

END_OF_DOCUMENT_TOKEN_TO_BE_REPLACED

The Nasties: What You Should Avoid in Your Deodorant

Commercial deodorants are bad news for the health of your underarms, but why exactly is this? The nasties that we refer to when talking about antiperspirants are the type that clog pores, damage skin and stop the body from the natural process of sweating - but some of...

END_OF_DOCUMENT_TOKEN_TO_BE_REPLACED

Tips and Tricks for Your Best Skin

Skin care can be tough. Finding your skin type, picking a good moisturiser, knowing how often to use a cleanser or a face mask or whether it’s necessary to exfoliate can be a chore. We for one understand the struggle! But don’t be disheartened, we’ve collected a few...

END_OF_DOCUMENT_TOKEN_TO_BE_REPLACED

Bored at home? Running out of things to do? Got no ideas on something to start on? Never fear, Hello Natural Co is here to cure your boredom blues and give some (hopefully helpful) suggestions on things you can do while you’re stuck in your house! 1 - Watch Something...

END_OF_DOCUMENT_TOKEN_TO_BE_REPLACED

Dry Shampoo – Worth the Buy?

Now I don’t know about you, but once upon a time I heard whispers surrounding dry shampoo and all the possibly nasty things it can do to your head and hair. It honestly terrified me and made me never want to use a dry shampoo for fear of seriously damaging my hair. It...

END_OF_DOCUMENT_TOKEN_TO_BE_REPLACED

So you’ve heard the whispers, huh? You’ve heard the name ‘Hello Natural Co’ being thrown around, maybe you’ve seen a signature pink label or caught a glimpse of a product on a friend’s shelf, perhaps you’ve stumbled upon our website or Instagram page... Now you find...

END_OF_DOCUMENT_TOKEN_TO_BE_REPLACED

You've been so wonderful this year, that we want to return the favour! We all know that recycling and being kind to the earth is the current trend, one we'd honestly like to see stick around, and so we've come up with a few fun and exciting ways to recycle...

END_OF_DOCUMENT_TOKEN_TO_BE_REPLACED
Shopping Cart
There are no products in the cart!
Continue Shopping
0